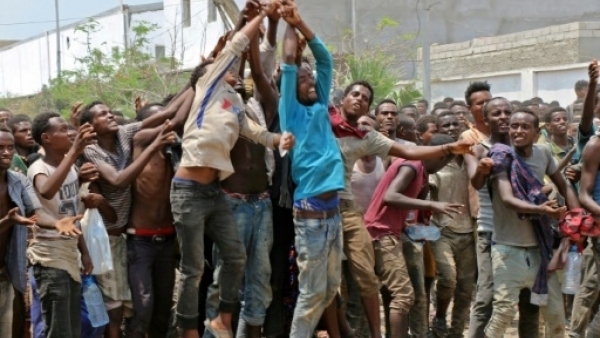 [ Immigrants in the football stadium while receiving food and water - AFP ]

Security sources revealed that there are three training camps for African mercenaries which are run by The Houthis in the city of Hodeidah and its countryside.

Security sources of the joint forces in the western coast told "Almawqea Post" that the group established three camps in Hodeidah to train African mercenaries, benefiting from the truce and the Stockholm agreement and not being hit by the bombing of the coalition aircrafts.

The sources said that one of the training camp is in Deir Eissa district of Bajal, the other one is in the area of Al-​​Murawah specifically in the farm of Ali Alhali and the third camp is at the naval base to the north of the city.

The Houthis forced hundreds of families to leave their villages and the areas of the northern part of the city since the beginning of this year after the Stockholm agreement, which took place on 13 December last, as well as more than 300 families living in the villages of Al-Murawah who were foerced to leave their homes.

The sources said that The Houthis are using african mercenaries in their war against government forces in Hodeidah in order to compensate for the shortage of soldiers.

According to the sources, The Houthis exploit the large influx of african refugees and attract many of them by a salary up to 100 dollars per month.

The sources noted that migrants are trained in various military disciplines (such as mine engineering, artillery, sniping, sea landing and diving, digging trenches and tunnels).

The sources said that The Houthis are exploiting the influx of refugees through the extended coastal strip, which lacks monitoring because of the circumstances of the country.

In its latest report, the United Nations High Commissioner for Refugees (UNHCR) predicted that the number of arrivals from the Horn of Africa to Yemen would reach 282,000 in 2019. According to the sources, this figure is considered unexpected because if The Houthis armed just 10% of this figure it would have an army of 25,000 - 30,000 fighters.

The sources also noted that the narrow area of ​​protection, especially in the north, as well as the policy of restricted movements continue to put the people concerned by UNHCR to increased protection risks.

Upto 1,789 african migrants, including 389 boys and 28 girls under the age of 18, are stranded in a football stadium in Aden amid a tragic health and food situation without the ability of continuing their journey to a Gulf country to seek work or even return home.

According to UN figures, about 150,000 immigrants arrived in Yemen last year, 92 percent of them from Ethiopia and the rest from Somalia and other neighboring countries.

The International Organization for Migration (IOM) expressed its concern of the situation that could continue for a longer period of time and the other migrants who might reach Yemen.

Yemen has been living in a war since 2014 between The Houthis and government forces who are loyal to The President Abdrabbo Mansour Hadi, this war escalated in March 2015 as Saudi Arabia intervened at the head of a military alliance in a support to government forces.