English
"Almawqea Post" reveals the details and doubts about the Saudi announcement of arresting the head of ISIS in Yemen
- Exclusive Monday, 01 July, 2019 - 05:57 PM 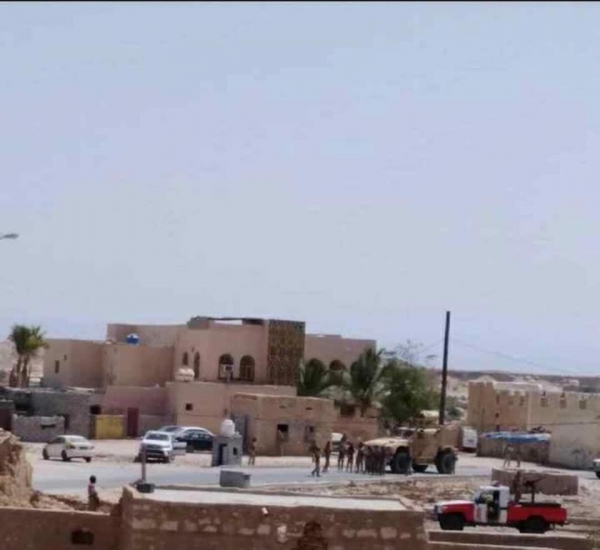 Questions were put about the reasons for not mentioning the exact location of the operation and the delay of its declaration .

Many questions were asked about the truth of the announcement of the spokesman for the Arab Coalition - Turki al-Maliki - in which he announced that Saudi Arabia arrested the head of ISIS in Yemen, the so-called "Abu Osama Al-Muhajir" - which as the announcement mentioned is the financial officer of ISIS - with some of his companions.

The Saudi agency "SPA" posted images and a video showing "Al-Muhajir" in the grip of Saudi forces who surrounded him, declaring that the operation took place on June 3, 2019, after a continuous monitoring of a house which resulted the arrest of three women and three children.

Almawqea Post knew from local sources that Al-Muhajir was arrested in "Qatar neighborhood" in Al-Ghaydah district of Al-Mahra province (east of Yemen) on June 3, in an operation that is still doesn't have clear details. At that time "Almawqea Post" couldn't publish that in order to get accurate and complete information.

According to the sources, "Al-Muhajir" was called from a suburb of Marib province by the governor of Al-Mahra Rajeh Bakrit who rented an apartment in Al-Ghuhaida from a woman working as a public servant, the apartment was furnished and equipped so that "Al-Muhajir" stays in it. It is yet unknown whether the arrested person was himself the leader of ISIS in yemen or not.

According to the sources, the rented house was not previously available for rent. The owner refused to talk about the coordination of the rent was made and whether she knew about the Al-Muhajir that he's a member of ISIS or not. Local figures tried to communicate with her but she refused to give any details.

There were doubts from security and local sources in Al-Mahra province since "Al-Muhajir" came to the city and the relationship of the governor of Al-Mahra, and the promises he gave to Al-Muhajir to come to Al-Mahra province which is living a popular protest against the Saudi presence for more than a year.

According to the sources, a few days after his arrival, Saudi forces came and stormed the house where the "Al-Muhajir" was staying along with two Saudis belonging to Al-Qaeda and took all of them to the Al-Ghuhaida airport, which has been turned to a military base by the Saudis. After that they were taken to the captial Riyadh.

The sources told "Almawqea Post" that the Saudi forces summoned the governor of Al-Mahra Rajeh Bakrit to Riyadh, where he stayed for few days and met during the visit the Saudi ambassador to Yemen - Mohammed Al Jaber - then he returned to Al-Mahra again after the holiday of Eid Al-Fitr.

Ambiguity of the place

The Arab alliance didn't mention an exact place of the operation and this shows reflects the curiosity of the reason and motives of the secrecy of the operation, especially that the operation took place in Al-Mahra province, in which its people refuse the Saudi presence. Senior leaders of the peaceful protest told "Almawqea Post" that this indicates that Saudi Arabia is trying to manipulate the issue of terrorism in Al-Mahra as a last chance against who rejects its presence by promoting itself as forces fighting terrorism in Yemen.

Saudi forces justify their presence in the Al-Mahra and other Yemeni provinces as counter-terrorism against Al-Qaeda and ISIS, similar to the justification of the United Arab Emirates in other areas which it controls in Yemen.

The Arab coalition forces did not speak about the American role in this operation, since there are US forces at the local airport of Al-Ghaida along with the Saudi forces, as "Almawqea Post" revealed in a previous investigation. Local and security sources in Al-Mahra confirmed that the task of US forces is to confront and trace elements belonging to Al-Qaeda in Yemen.

It was noted in this operation the secrecy of the Saudi media till this day, which indicates the rearrangement of the story to appear today registered as security sucess by arresting the head of ISIS in Yemen, while official news published at that day shows a different details than the details published by the Alliance recently.

The media center of Al-Mahra province, which is responsible for covering the official news in Al-Mahra, posted on its Facebook page a report about the incident that day. It didn't mention the arrest of the leader of ISIS in yemen, and said that it was a group of Al-Qaeda members.

The report published by the media center on June 3 - the same date that the Arab Coalition said that it arrested "Al-Muhajir" - said that the coalition forces and the military police in Al-Mahra province carried out a qualitative operation that targeted a house in the city of Al-Ghaida used by terrorists wanted for justice as a safehouse to plan for carrying out terrorist attacks on the city. The operation ended by the arrest of the most dangerous without the use of force.

While the Arab coalition forces said that "Al-Muhajir" is the head of ISIS in Yemen, the media said that according to what he named as local sources, the gang belonged to Al-Qaeda and was planning to carry out terrorist attacks and risk the stability of the city, adding that police forces surrounded the place and raided the house without the use of force and controlled the situation.

An English news website named "The reference" espoused the UAE's view that the Arab Coalition Forces and the Yemeni military police in Al-Mahra province had arrested one of the most dangerous terrorists after a targeted operation on a house used by terrorists to carry out attacks on Al-Mahra.

About the same operation, Al-Mayadeen - the Lebanese channel - published on June 10 that according to yemeni sources that US, British and Saudi military teams raided a house in Qatar neighborhood of Al-Ghaida and arrested three Yemenis and one Saudi who belong to Al-Qaeda including women with them.

The channel said that the soldiers wore Yemeni uniforms, while the detainees included a group of women who were taken to the headquarters of the Emirati-Saudi coalition forces in Al-Mahra. It also said that the raid was protected by large forces of military police led by Colonel Muhsen Marsa.

Ambiguity of name and identity

It is not yet known the geographical area to which "Al-Muhajir" belongs in Yemen or outside and he has not been named before in media reports or security confirms that he is the head of ISIS in Yemen. Many different media including some of Saudi Arabia and the UAE published about killing or arresting of ISIS leaders in the southern provinces but all of them didn't mention the existence of the head of ISIS in Yemen.

The most prominent of these leaders was the death of Saleh Nasser Fadl Al-Bakhshi, nicknamed the "Amir of Aden" in the Yemen branch of ISIS, who was killed on April 28, 2018 in clashes with the pro-UAE forces in Aden.

According to what Al-Arabiya channel, On May 19, 2018, The Ministry of the Interior in Aden announced that it has arrest two wanted men, including an Amir of ISIS in Yafa district of Lahj province, without mentioning his name.

The name of "Al-Muhajir" coincides with the name of the spokesman of ISIS whose known as Abi Hassan Al-Muhajir, who announced the responsibility of ISIS in the attack Ahwaz city in Iran in September 2018, as Al-Arabiya published on its website. The name also coincides with a leader in ISIS named Abu Omar Al-Muhajir who fought with ISIS in Sinai, Libya and Syria.

The announcement of the Saudi-led Arab alliance of arresting Al-Muhajir as the head of ISIS in Yemen causes worries about launching a new kind of intense military presence in Yemen under the pretext of confronting a terrorist group despite reports which indicates that the organization is limited in Yemen and has a bad relationship with Al-Qaeda, according to US State Department report on terrorism in Yemen in 2017 and other studies that shows the weakness of ISIS in Yemen.

The first appearance of ISIS in Yemen was in November 2014 when the organization twittered and published a link containing a four-minute recording by a group called "Mujahideen of Yemen" in which it announced its allegiance to Baghdadi. After three months in February a small group of Yemenis in Dhamar and Sana'a issued a joint statement in which they turned their allegiance to Al-Dawahri and pledged allegiance to Al-Baghdadi, saying they would fight the Houthis, whom they described as apostates.