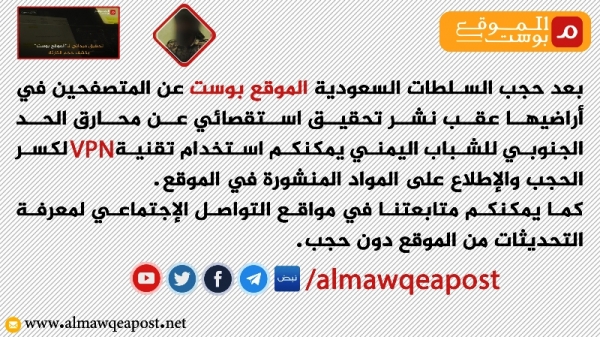 The Saudi authorities blocked "Almawqea Post" from its browsers for the second time in the past five years.

Blocking the website happened a day after it published an investigative research that revealed the violations and abuses against the yemeni soldiers who were recruited by the Saudi forces to defend their lands in the southern border.

The investigation, which contained exclusive documents and testimonies of military commanders, revealed the holocaust of Yemeni soldiers who had been recruited by Saudi forces through mercenaries working for them in exchange for money for the purpose of fighting the Houthi group in the southern Saudi border.

This is the second time that the Saudi authorities block "Almawqea Post" from its browsers, after it was blocked in 2017.

The editorial board of "Almawqea Post" considers these actions as aim to prevent the concealment of facts to followers and public opinion, also an attempt to stop the free press and withhold information from the public.

The editorial board considers that the Saudi authorities' step confirms the extent of its concern about the press, which reveals its practices and the extent of the harassment and terrorism it is practicing against the press and journalists.

The editorial board affirms that this step will not deter it from continuing to uncover and reveal Saudi crimes and practices anywhere in Yemen, using all the press methods that enable us to provide an independent press that seeks the truth and is based on full professional standards when publishing.

Followers of the "Almawqea Post" can see the news broadcasted on the website by using the VPN service to break the blocking and follow its pages on social media.

To read the investigation, on the following link:

"Death Brigades" ... an investigation of "Almawqea Post" with testimonies and documents revealing the border crematoria on the Saudi fronts.

To watch the video of the investigation: