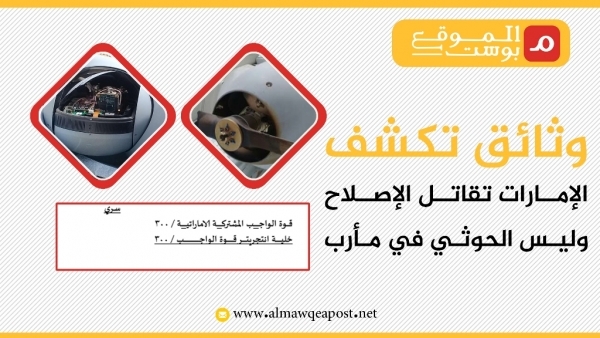 [ UAE targeting Yemeni Islah Party instead of Houthis in Marib ]

The United Arab Emirates came to Yemen within the Saudi-led Arab coalition, with the aim of restoring legitimacy to the internationally recognized Yemeni government, and fighting the Houthi group that carried out its coup on September 21, 2014.

According to this concept and for this task, Emirati forces came to Yemen and interfered militarily alongside forces from the National Army of the legitimate government, which consists of several political parties that support legitimacy and are involved in its formations and frameworks. Among those forces is Al-Islah party.

However, months later after the liberation of Aden from the Houthi group and the forces of former President Ali Abdullah Saleh in the mid of 2015, the UAE has demonstrated its hidden agenda of fighting and restricting Al-Islah party by targeting its leaders and reducing their presence in state institutions. This was actually achieved by preventing government leaders belonging to Al-Islah party from returning to Aden and assassinating other leaders in the party in more than one city in southern Yemen, which was revealed later on by the "BuzzFeed" in its report about foreign mercenaries hired by the UAE to assassinate leaders in Al-Islah party. 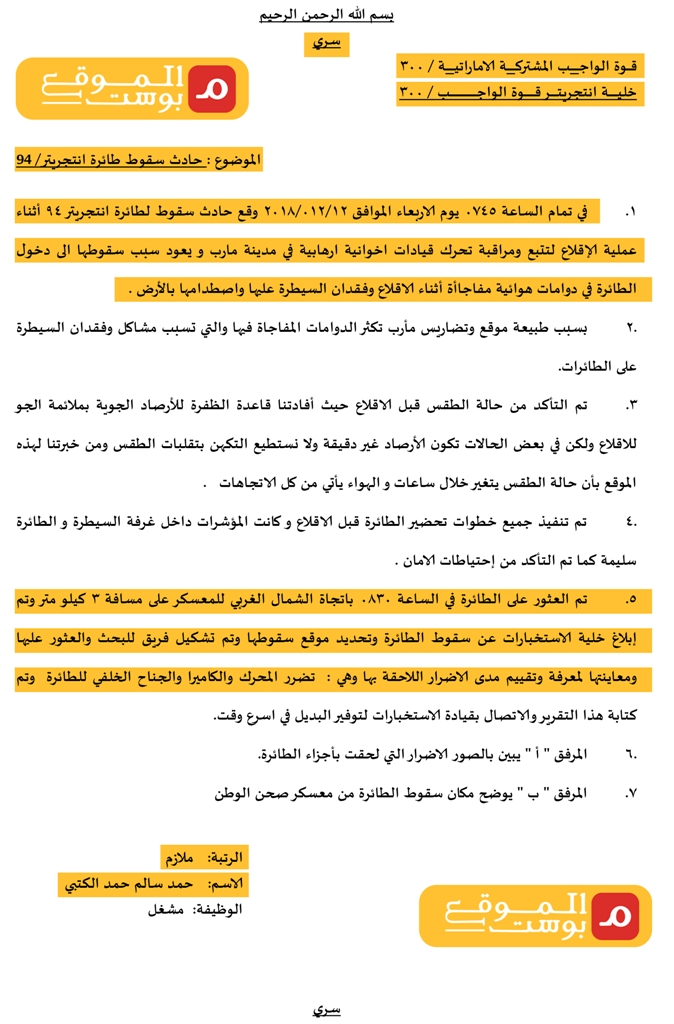 A document we obtained reveals that the UAE, through its forces in Marib Governorate, has targeted Al-Islah party, whom it names as "Muslim Brotherhood", through drones that carry out the tasks of spying, taking maps and targeting people.

The document is a message sent by the drones cell in the Emirati forces known as the "Emirati Combined Duty Forces" to an unspecified receiver, and it includes a report on the crash of an "Intriter / 94" plane in Marib.

According to the document which was titled as "Top Secret", a drone of "Intratera / 94" crashed at 07.45 on the twelfth of December 2018 in Marib because it entered a sudden air swirls during take-off, which led to the loss of control and fall on the ground. It was found after about 45 minutes at a distance of three kilometers from the camp (whose name has not been determined), and its fall caused several damages, as shown in the attached photos in the document. 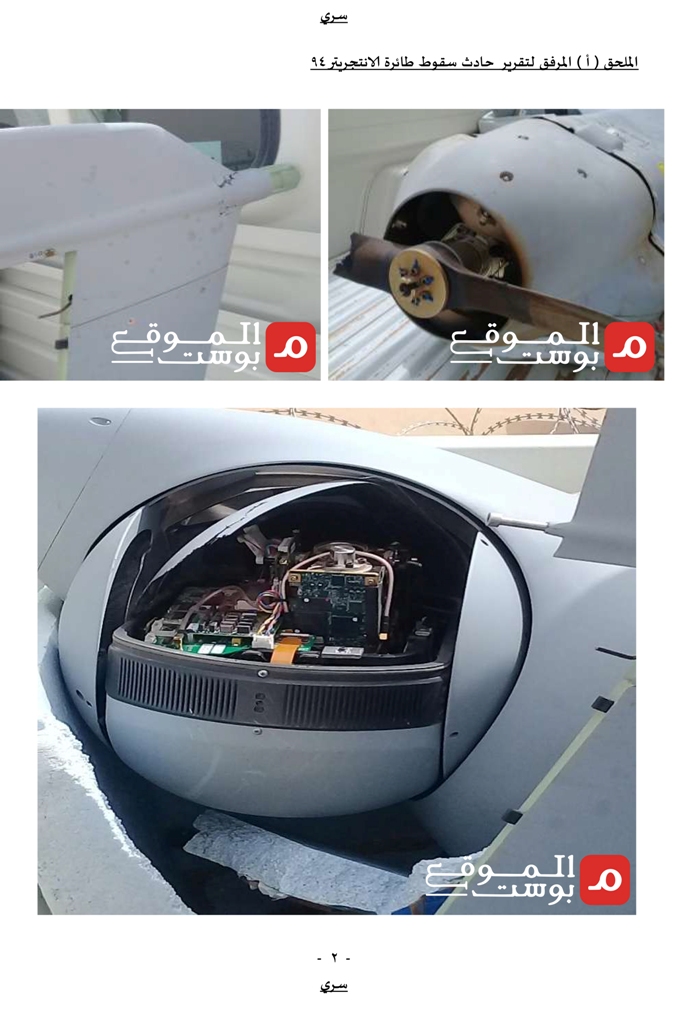 But the surprise is that the document mentioned the mission of that drone. The document stated that the drone was going to follow and monitor the movement of the so called terrorist Brotherhood leaders in Marib, a reference to leaders of Islah Party, which the UAE classifies as an extension of the international organization of the Muslim Brotherhood, which is classified by the UAE as a terrorist group. 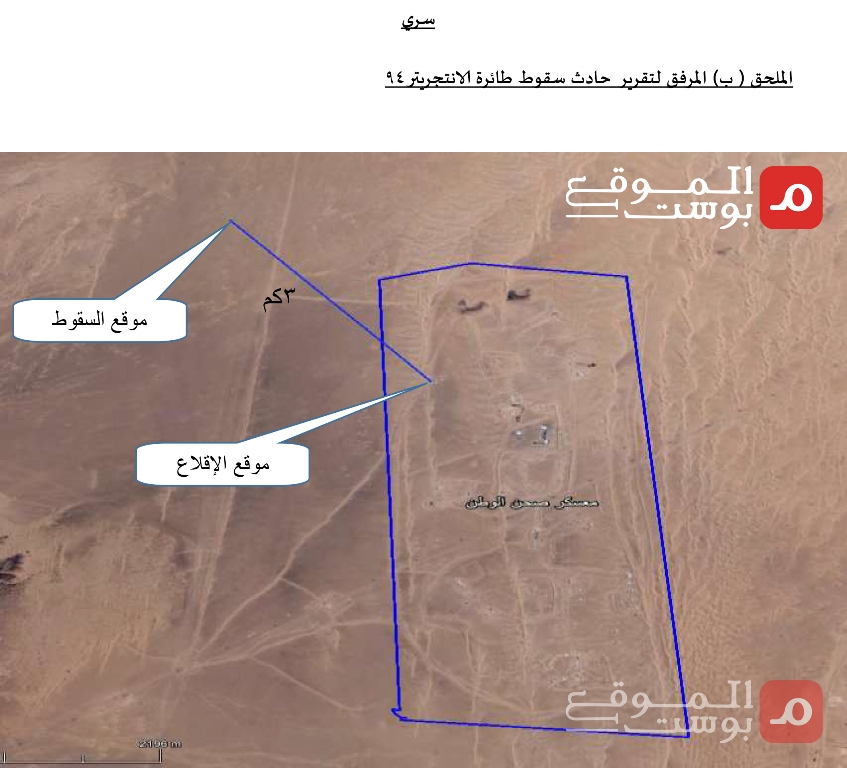 We went back to the official news broadcasted by the government media in the UAE to see if it had covered the crash of a drone of the Emirati forces on the same day, as shown by the document or after it, and we did not find any news or press reports so this confirms that the Emirati forces preferred to conceal the incident and made sure that the story of the fall was not leaked to the media and kept the matter within the military information.

The document also reveals the military action mechanism followed by the UAE through its forces in the Marib, and that is through what the document included in its reference to the Al-Dhafra Meteorological Base, which informed the forces about the weather in the Marib before the plane launched.

Another document shows the military actions accomplished by the Emirati forces by the "Intratera / 94" drone, on 11th of July 2018 in the Sarwah area, represented by monitoring the stopping of (3) bicycles and (3) individuals on the Mora Valley in Sarwah, the monitoring of a suspicious building in the north Al-Ajarm that was bombed and monitoring a bicycle, two people and a car that stopped in Al-Zaghan village. The same drone also detected a car stopping on Sarwah main street was targeted bombed. In addition, it was also monitoring the four individuals to the north of Al-Ajarm hill. All of the documented monitoring were classified as supplying the enemy's forces in the Sarwah front. 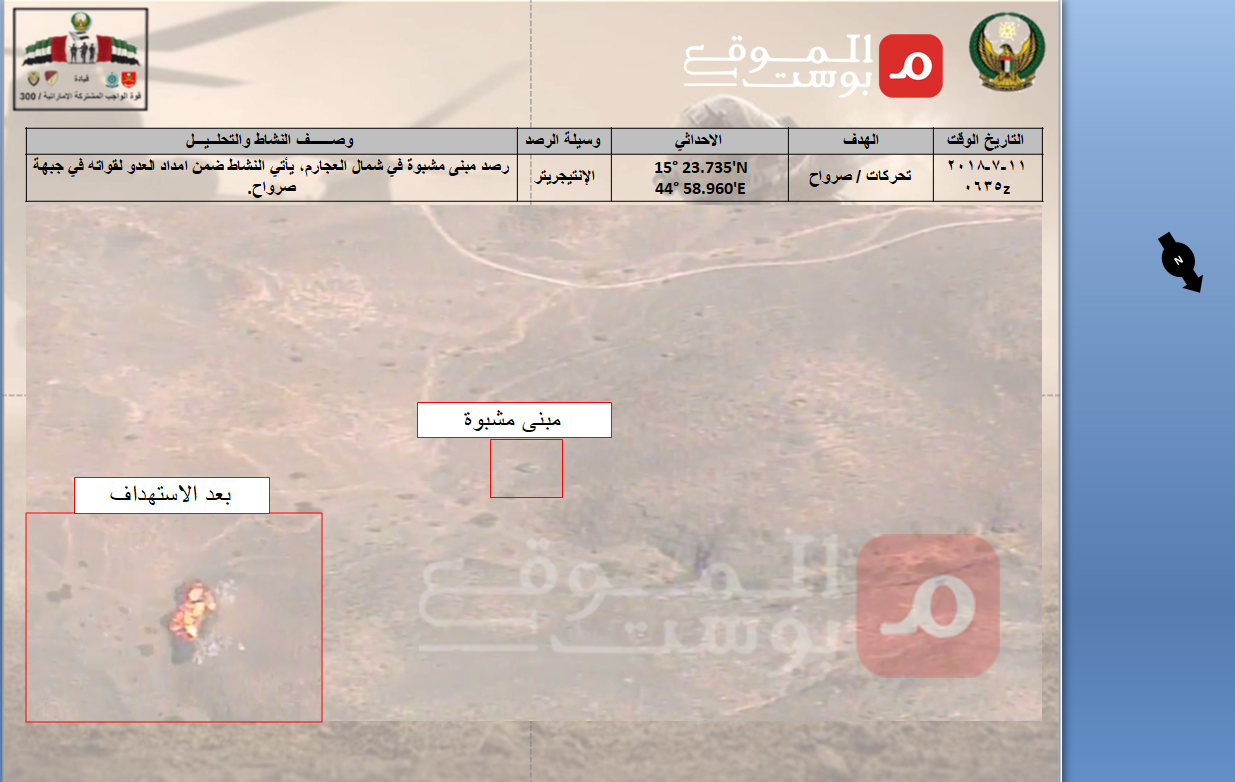 The type of the drone that crashed was recently owned by the UAE Armed Forces through a deal signed on February 27, 2018 with local and international companies specialized in drones, with a value of 878.371 million dirhams in just three days during the drone systems exhibitions "Yumex 2018" and simulation and training "Simtex 2018", which were held in the UAE from 25 to 27 February 2018. 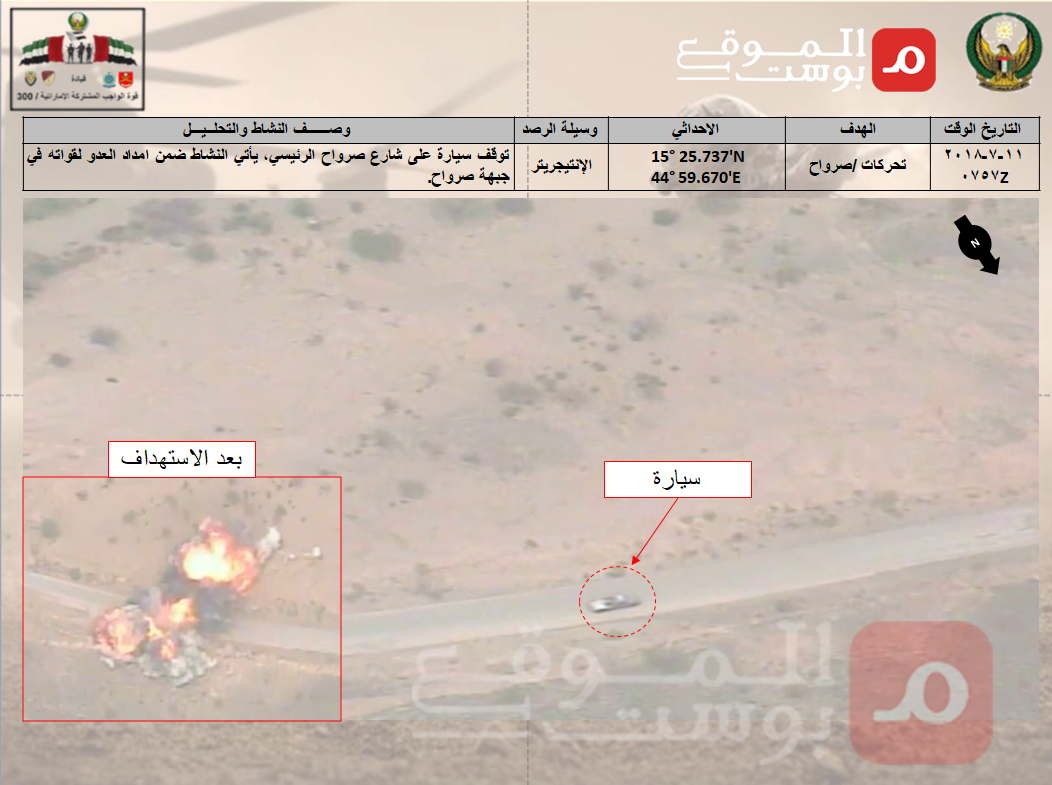 Another company is the Canada-based "CAE MARITIME MIDDLE EAST", to purchase and install a Black Hawk aircraft and Bell aircraft, and also the Emirati company "International Trust" for the maintenance and repair of nano aircraft systems, as well as the Russian company "GSCRBC" to buy and install the stands of igla missiles and the American company Insitu to buy four integrater drones.

After the search and investigation of the drones manufacturing companies on the internet, it became clear that the plane that landed in Marib was manufactured by the American company "Insitu", which announced its development of this plane on July 22, 2014, as the first plane operating for 24 hours a day and has the ability to carry overload and support future missions, the company manufactured it to serve the U.S. Marine Corps under the US Navy and USA Registry program.

According to the manufacturer, the plane operates in the most difficult environments in the world, and excels in decision-making through the strong information it provides during the night or day, to carry out its tasks of photographing, capturing a wide range of images, a range of spectral images, communications, mapping and meteorology, radar and signal collection service, and performs high-level monitoring and exploration tasks.

This type of aircraft flies at an altitude of 19,500 feet and the maximum horizontal speed is 90+ knots, the starting speed is 55 km, and it carries a maximum load of 40 pounds (18 kg), as well the value of one plane reaches about five million Emirati dirhams. The United Arab Emirates obtained four of them through the contract of its armed forces with the American company Insitu to buy 4 drones of the type of Ingretrer worth 22 million and 6 thousand and 400 dirhams. 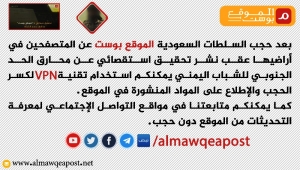 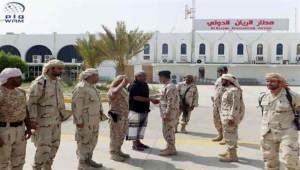 Saturday, 30 November, 2019
Sniffer dogs and rape ....A former detainee at Al-Rayan airport reveals to "Almawqea Post" the atrocities of abuses by UAE forces 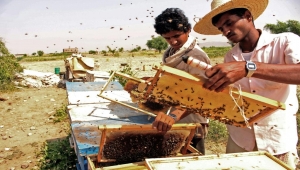