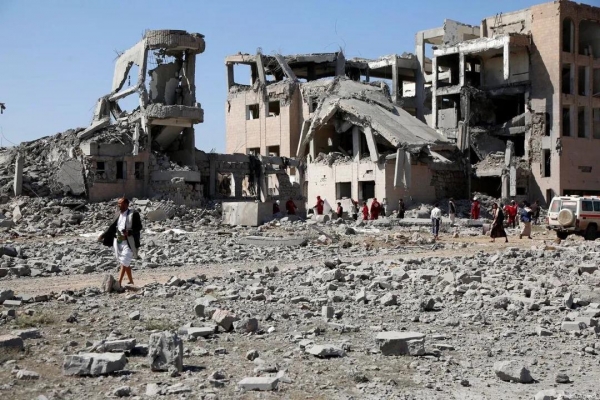 Law firm Stoke White has filed evidence of war crimes and crimes against humanity said to have been committed in Yemen. The firm made the submissions in three jurisdictions — Britain, the US and Turkey — on behalf of its clients.

In a press release issued today, Stoke White explained that the applications have been made using UN mechanisms, requesting the authorities to investigate further the notorious Sanaa Funeral Hall bombing in 2016, the UAE’s use of mercenaries and allegations of torture in secret prisons in the country. The submissions are said to include evidence that officials and even authorities higher up in the coalition partners — notably the UAE and Saudi Arabia — as well as mercenaries were all involved directly in war crimes in Yemen.

In September last year, the same law firm held a press conference in which it announced its intention to file a complaint on behalf of three clients whose relatives were among the victims of the funeral bombing in which 137 civilians were killed. The principle of universal jurisdiction was cited, under which anyone accused of committing serious international crimes may be brought to justice in, for example, British and US courts, “irrespective of where they took place, who the perpetrator is and what their nationality is”.

Last week, Stoke White also submitted evidence to the UN Working Group on the Use of Mercenaries, and requested an investigation into all mercenaries operating in Yemen, in particular the executives of America’s Spear Operations Group.

Today it was announced that separate applications were filed with the UN Human Rights Council and the Group of Eminent Experts on Yemen regarding violations of international human rights and war crimes.

The applications include allegations such as targeted killings, enforced disappearances, sexual assault, illegal detention and torture in secret prisons, as well as the use of American and other foreign mercenaries in Yemen. They point out that responsibility is shared by the internationally-recognised government of Yemen, Saudi Arabia and the UAE.