English
Houthi Brinkmanship in Yemen May Cause a Region Wide Environmental Disaster
- Nationalinterest - by Michael Horton Sunday, 02 August, 2020 - 03:45 AM 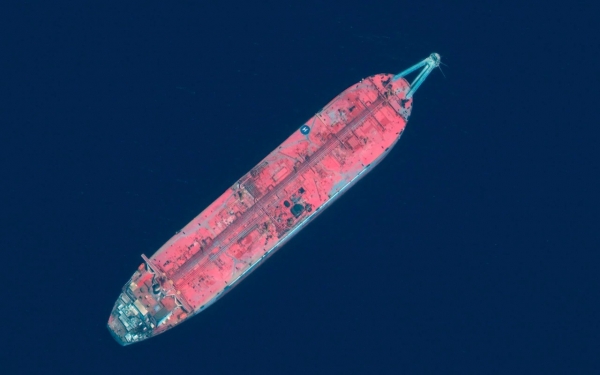 Preventing an environmental disaster that would have regional ramifications and further devastate the already suffering population is a rare occasion when all sides in Yemen’s war can win.

Yemen and the broader region face an unparalleled environmental disaster in the Red Sea. The FSO Safer, an oil tanker with over a million barrels of degraded crude onboard, is moored four miles off Yemen’s coast. It is steadily deteriorating. A spill or explosion will have profound and lasting implications for Yemen and the other nations along the Red Sea.

Unlike Yemen’s other challenges—interlocking wars, famine, and water scarcity—the international community can quickly address the plight of the Safer. A UN-backed team of experts is already pre-staged and ready to travel to the tanker. Solving this problem is one issue that all warring parties in Yemen should be able to agree upon, especially Yemen’s Houthis who control the waters where the Safer is moored.

Yet, it is the Houthis and their government who are obstructing UN and third party access to the Safer. Their recalcitrance and brinkmanship on this issue could cost them politically and even militarily in the case of an explosion or leak.

Built as a tanker in 1976, the Safer has been moored off the coast of Yemen since 1988 when it was converted to a floating storage and offloading (FSO) vessel. It serves as the terminus of one of Yemen’s major oil pipelines and was a key component of the country’s oil handling infrastructure. However, since 2015, when Saudi Arabia and its allies launched their armed intervention in Yemen, few repairs and almost no maintenance have been carried out on the Safer.

While a brave Yemeni crew continues to man the Safer, the vessel’s critical systems are largely offline. Without functional fire control and inert gas systems, and its diesel engines, the Safer could explode. The ability to inject inert gases into the compartments of stored crude is essential and yet it has been five years since this was done. In addition to these problems, the Safer is a forty-four-year-old single-hulled tanker that has been moored in the high salinity Red Sea for thirty-two years.

“It’s like an eggshell in vinegar,” an expert on hull corrosion said, commenting on the likely state of the Safer. “Even with the most stringent maintenance and upgrade schedules in place, this ship would be a danger due to its age, location, and design,” said the same expert. The hull and the turret which connect the ship to undersea pipelines and moorings are corroded and could fail at any time.

If the Safer’s problems aren’t dealt with, the resulting oil spill or explosion will devastate not only Yemen’s rich marine ecosystems but those of much of the Red Sea. The oil stored on the Safer is Marib light crude which, due to a viscosity close to that of seawater, will disperse throughout the water column. Yemen’s Red Sea coast is home to pristine and unique ecosystems. A spill would destroy everything from threatened and vital mangrove swamps to untouched coral reefs.

Containment and cleanup, even if the required resources were in place, and they aren’t, will be difficult and ineffective. The ramifications of a spill from the Safer will be felt throughout the Red Sea region. Such a spill would devastate fisheries, snarl shipping, and force desalination plants to go off-line.

Artisanal fishing is the lifeblood of many of the coastal communities in Yemen’s Tihama region, the area of Yemen which abuts the Red Sea. Due to the ongoing war in Yemen, fishing has only grown in importance as a source of food, income, and employment. Across from Yemen, in Eritrea and Djibouti, coastal communities also depend on vulnerable fisheries to sustain them.

One of the primary sticking points for the Houthis is the supposed value of the crude onboard the Safer. The Houthis are demanding a share of the roughly $40 million that would theoretically result from the sale of the oil once offloaded. In reality, the oil, which has been stored in poor conditions for five years, is primarily sludge that is worth far less than it will cost to safely offload the crude.

The Houthi leadership and those allied with them would do well to think through the implications of an oil spill or explosion. The little international standing they now have would evaporate much faster than spilled oil as Yemenis and the international community rightly blame the Houthis. The fallout from an environmental disaster that will dwarf the famous 1989 Valdez oil spill in Alaska may upend the gains the Houthis have made on Yemen’s battlefields. Their tribal and political coalitions could unravel due to pressure from even more acute food shortages and widespread condemnation.

Preventing an environmental disaster that would have regional ramifications and further devastate the already suffering population is a rare occasion when all sides in Yemen’s war can win. An explosion or leak aboard the Safer would compound all of Yemen’s many problems. One can only hope for the sake of Yemen and the whole of the Red Sea region that the Houthi leadership will demonstrate political maturity equal to their military acumen.

Michael Horton is a fellow at the Jamestown Foundation. He has written for numerous other publications including: West Point’s CTC Sentinel, The Economist, The Christian Science Monitor, and The American Conservative.