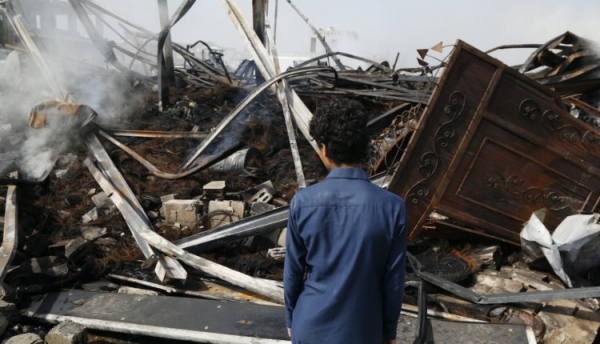 [ An air strike of the Saudi-UAE coalition in Yemen ]

UN reports revealed that the Saudi-UAE coalition has recently used internationally banned weapons in its military operations in the Hudaydah Governorate, western Yemen.

The United Nations report expressed the organisation’s “concern” after it revealed the use of cluster bombs by the Saudi-Emirati coalition in Yemen in one of the air strikes that targeted the Hudaydah Governorate.

The head of the United Nations mission to support the Hudaydah agreement, Abhijit Guha, said in a statement that he is concerned about the repeated air strikes in the Al-Arj area between the city of Hudaydah and the port of Salif between 16-23 August, according to the Yemeni Al-Mahrah Post website.

Guha, who chairs the redeployment committee, indicated that the heavy fighting that broke out around Hudaydah city on Thursday morning, is of “special concern”, in addition to “reports of the use of cluster weapons during one of these air strikes.” Guha called on the parties to the conflict in Yemen to “desist from any measures that harm the implementation of Al-Hudaydah agreement that was reached in Stockholm on 13 December 2018.”

The UN official urged the parties to the conflict in Yemen to “refrain from any other activities that put the lives of civilians in the governorate in danger.” The Houthi group, through an official source in Hudaydah, accused the Saudi-Emirati coalition of using a cluster bomb on 23 August, on a farm in the Al-Arj area, Bajil District.