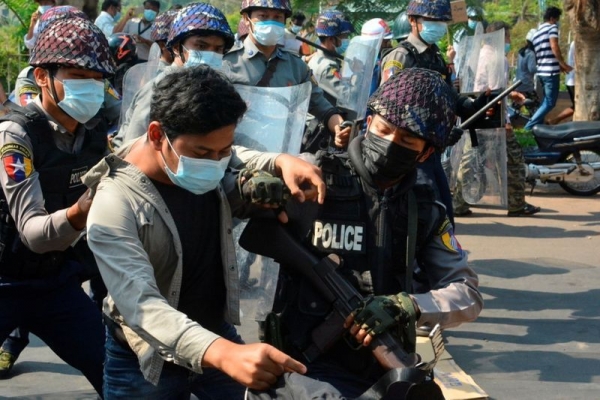 Myanmar’s junta on Saturday suspended laws constraining security forces from detaining suspects or searching private property without court approval and ordered the arrest of well-known backers of mass protests against this month’s coup.

A series of announcements came on the eighth day of country-wide demonstrations against the Feb. 1 takeover and detention of elected leader Aung San Suu Kyi, which halted an unsteady transition to democracy that began in 2011.

The announcements bore echoes of the near half-century of military rule before reforms began, when the Southeast Asian country was one of the world’s most repressive and isolated states.

An order signed by military ruler General Min Aung Hlaing suspended three sections of laws “protecting the privacy and security of the citizens”, which had been introduced during the gradual liberalisation.

Those sections include the requirement for a court order to detain prisoners beyond 24 hours and constraints on security forces’ ability to enter private property to search it or make arrests. The suspensions also free up spying on communications.

The coup has prompted the biggest street protests in more than a decade and has been denounced by Western countries, with the United States announcing some sanctions on the ruling generals and other countries also considering measures.

As anti-coup protests sprang up again in the biggest city Yangon, the capital Naypyitaw and elsewhere on Saturday, the army said arrest warrants had been issued for seven high profile critics of military rule over their comments on social media.

People should inform the police if they spot any of those named and will be punished if they shelter them, the army’s True News information team said in a statement.

It said cases had been filed under a law which provides up to two years jail for comments that could cause alarm or “threaten tranquillity”.

On the wanted list is Min Ko Naing, 58, who was imprisoned for most of the time between 1988 and 2012, and who has been prominent in encouraging protests and a civil disobedience movement followed by a swathe of government workers.

Reuters was not immediately able to reach him for comment.