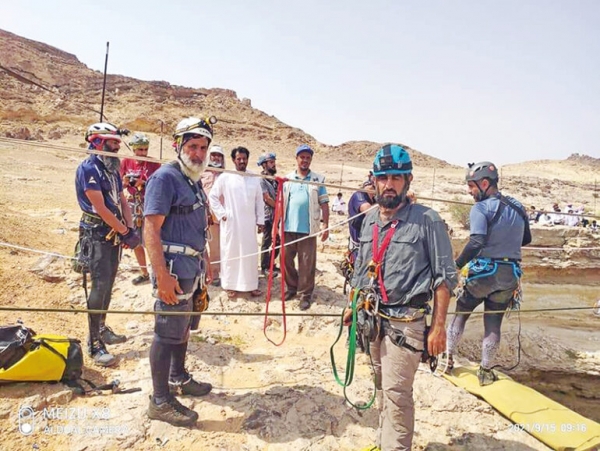 Muscat – After exploring and documenting more than one hundred caves in Oman, Omani Caves Exploration Team (OCET) has stepped up its efforts and has gone international. The team successfully documented the over 100m deep Well of Barhout, also known as ‘Well of Hell’, in Yemen recently.

The Well of Barhout, a giant hole located in the desert of Al Mahra province in Yemen’s eastern region, is surrounded by mystery. Local folklore claims it was created as a prison for demons.

The team also published a book called A Guide to the Caves of Oman, chronicling more than hundred caves of Oman.

Speaking to Muscat Daily, Dr Mohammed al Kindi, a geologist and one of the members of OCET, said, “Omani Caves Exploration Team, in cooperation with the Yemen Geological Survey and Mineral Resources Board, documented the Well of Barhout recently. The well is millions of years old and according to local residents it has not been explored or documented before.”

The well is around 30km from Oman border in the desert of Al Mahra province. “The depth of the well is 112m, and 30m in width at the surface. Deep inside, the cave expands to 116m.”

“Such caves are formed by the dissolution of limestone, such as those found in the Dhofar governorate in southern Oman, and the Governorates of Mahra and Hadramout in Yemen. These layers inside the well are subjected to continuous dissolution due to the interaction of ground and surface waters that contain acids and salts forming huge pits and deep caves over millions of years,” Kindi said.

The well contains many small cavities and sharp rocky ridges. At a depth of approximately 65m from the surface, water emerges from holes on the walls to form beautiful waterfall. The well also has other waterfalls that vary in the abundance and continuity of water, he said.

“The eastern waterfall is the most active, while the flow of water from the southern waterfall is interrupted. The hole contains a variety of cave deposits, and organisms, including snakes, frogs and beetles. Some stalagmites and stalactites are more than 9m long. This deep hole has been associated with many legends, including that the pits contain huge crocodiles, and that it is the dwelling of the jinn.”

Kindi said the team aims to explore caves spread across Oman and document them. “Our team calculates the age of cave deposits and the level of water in the ponds. It is a scientific process where we try to learn the age of the cave and the different changes it went through by looking at its deposits as well as the soil inside.”

About the group’s future initiatives, Kindi said that they have lunched the trial version of a book about caves; the book will be available in the market at the end of October.

“We added this new discovery to our book. Our team took five years to register over 101 caves from different governorates of the sultanate. The team used 3D instruments and traditional methods to measure the dimensions of caves. The book – in English and Arabic – tries to touch on important aspects of caves in each geological era. Some of the questions addressed include what tectonics affected these caves, what organisms lived there and how climate and life developed. We took samples of water and soil from these caves to see the different age patterns that the caves went through.”