English
Washington said they were sailors and Aden considered them smugglers..
Two narratives by the US Navy and the Yemeni Interior Ministry about a naval operation near the coast of Yemen
- Aden- Exclusive Saturday, 29 Octoper, 2022 - 07:54 PM 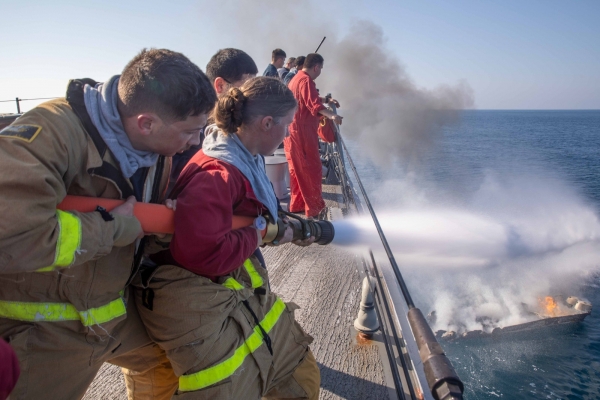 The US Naval Forces Central Command said it rescued three Yemeni personnel in the Gulf of Aden after their small boat caught fire while crossing international waters on October 26.

The US Navy stated on its website that its personnel extinguished the fire from the guided-missile destroyer USS Nitze (DDG 94) after observing what had been suffered by the sailors, and they were rescued before their boat sank about 50 miles from the Yemeni coast.

They added, in a news item quoted to Arabic by Al-Mawqea Post, that the Yemeni sailors identified themselves as Yemeni citizens, and they were immediately transferred to the Yemeni Coast Guard.

However, on the same day, October 26, the Yemeni Ministry of Interior announced that the Coast Guard forces in Al-Mahra sector had received from an American ship three Yemeni people suspected of working in a contraband smuggling network, after they were rescued by the American ship in international waters, north of the Arabian Sea, after fires broke out in their boat.

The Interior Ministry said in a news item on its website that initial information indicates that the fire was set by the boat's crew to get rid of the smuggled materials.

It stated that it referred the three people to the competent authority to complete the ordinary procedures, in coordination with the local authority in Ghaydah to provide the necessary medical care for an injured one of the victims.

The Ministry of the Interior revealed that a Yemeni Coast Guard boarding and inspection team has been present for days on board the American ship, in the context of rebuilding capabilities, exchanging experiences, cooperating and coordinating between the two countries in the field of combating arms and drug smuggling, and strengthening maritime security operations.

The US Navy destroyer follows the US Fifth Fleet, which works as an assistant in ensuring maritime security and stability in the Middle East. It is stationed in Bahrain, and began operating in the region this summer.

The operating area of ​​the US Fifth Fleet includes 21 countries, in the Arabian Gulf, the Gulf of Oman, the Red Sea, parts of the Indian Ocean, and three critical choke points in the Strait of Hormuz, Bab al-Mandab and the Suez Canal.